Chloe has to walk the course twice before she takes Flight

Chloe Chadwick has just returned from making a winning appearance at the British Showjumping National Championships at Stoneleigh Park in Warwickshire.

But Chloe, who is 21 and from Ramsey, is not just your average showjumper: Chloe is registered blind.

She has a rare genetic eye condition which means that she is completely blind in her right eye and has only very limited sight in her left.

She has been horseriding since the age of 10 when she was bought her first pony and started having lessons.

Four and a half years ago she got her current horse, Innocent Flight, who is now nine years old.

Since then, she has been training him in show jumping and dressage, working with her instructors, dressage rider Ivan Kelly and showjumper Hannah Goodby.

Chloe competes all over the island against able-bodied riders and travels across to competitions in the UK as much as possible.

Hat-trick
She travelled away earlier this year to the para-dressage competition at Northop College and also won her class there.

This year was the third year running she had competed in the para-equestrian show jumping championship at Stoneleigh and she came away winning her class again, making it a hat-trick.

Chloe, who is classified as Grade Four in para competitions, is only allowed to jump heights up to 70cms.

The added difficulty for her includes the fact that she cannot actually see the numbers of the jumps which means she has to walk the course very carefully before she goes into the ring on her horse.

Chloe explained how she manages to find her way around the course, saying: ’I always walk the course twice, usually with my mum.

’I walk around the first time to get to know where I’m going then I have to walk the direct line that I’m going to take so I know the number of strides between each fence.’

Talking about how it felt to win at such a prestigious show, Chloe added: ’It was a bit emotional, especially winning the rug and the sash.

’It was a big venue and my horse was really good.’

This year Chloe, who works at Phoenix Windows and Ballavartyn Equestrian Centre, was accepted onto the Isle of Man Sports Aid awards programme.

She said: ’I want to say thank you to Ivan and Hannah and to Isle of Man Sports Aid, Ballavartyn and Isle of Man Steam Packet. I also want to thank my mum Tracey and my stepdad, Gary Fletcher, for their support: they drive me everywhere.’

Chloe is also on the look-out for any potential sponsorship to help her with the expense of travelling and stabling in the UK for competitions. If anyone is interested they can contact her by email at tracgaz@manx.net 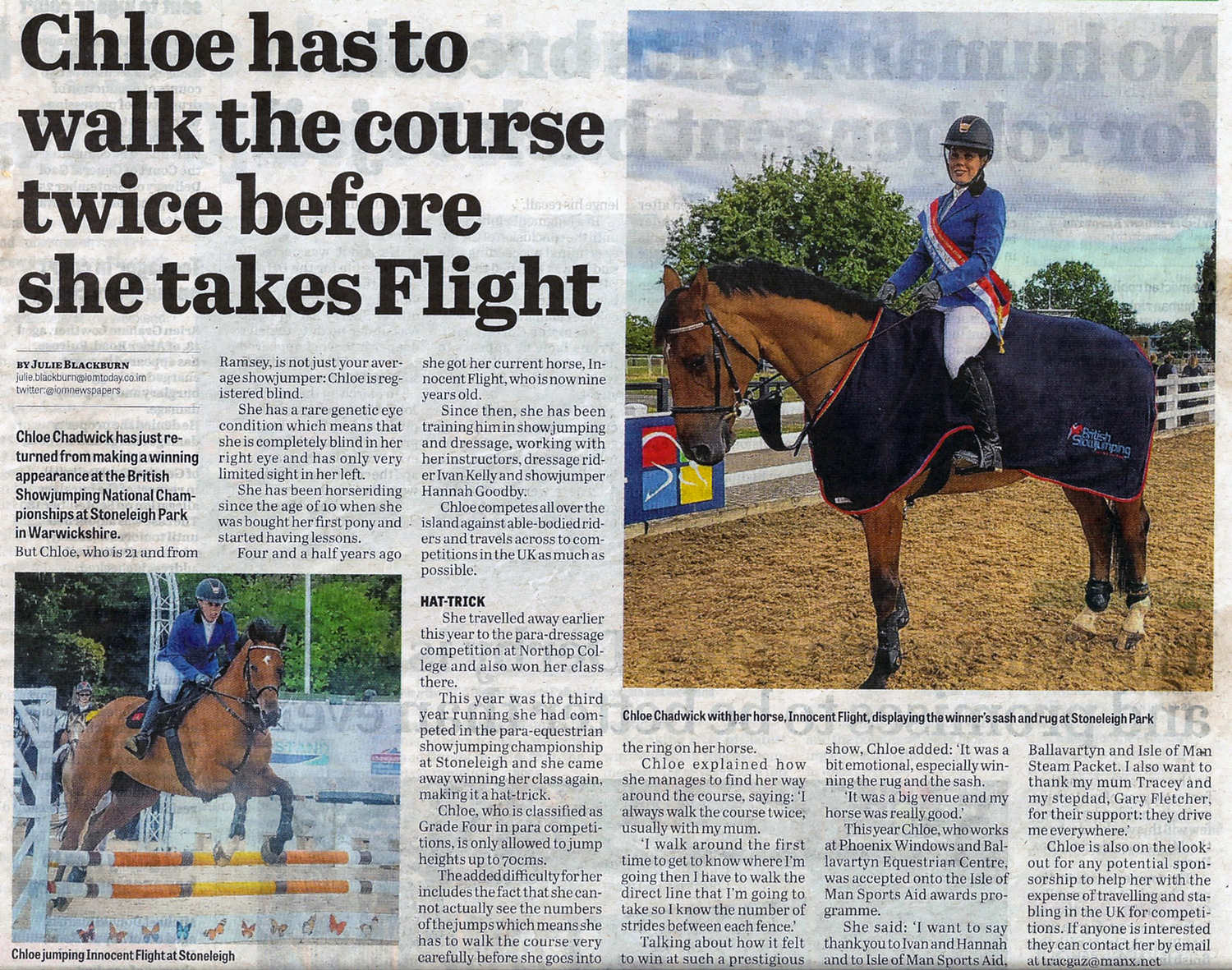