No Horsing around for Hannah

When Hannah Goodby was about two years old she was lifted on to a pony for the first time, and so began her love of riding.

Hannah has inherited her love of horse from her mother Babs and her two elder sisters Rebecca and Carolyn, who both competed successfully at national level. Carolyn has now relocated to England and continues to compete on her thoroughbred gelding Lloyd. Rebecca no longer competes but is keen to support Hannah.

The only member of the Goodby family who is less enamoured of all things equestrian is Hannah's father. Hannah said: “When Dad first met Mum he thought he ought to have a few lessons, but then he had a bad fall and that seemed to put him off.”

“Dad's very supportive of my show jumping career, though, and without his and Mum's help I would never have progressed as far.”

Hannah took to riding from day one, and by the age of four had started to compete in local gymkhanas, but she didn't have her own pony until she was about nine.

“Mum and Dad saw I was doing well locally on other people's ponies so they bought my first pony, Lucky Strider. I did really well and by the time I was 11 qualified for the Horse of Year Show at Wembley. I didn't feel nervous as I'd been competing in one way or another since I was much younger and finished sixth in my class.”

After a very successful career in junior competitions, Hannah has made the transition to senior events with much success. Her horse, Monty's Star, is a Belgian Warmblood by the well-known show jumping stallion Heartbreaker.

"I've progressed a lot since I purchased Monty," said Hannah, "largely through being a recipient of the Ballaseyr Manx training programme and guidance from my regular trainer in the Island, Suzanne Corlett from Conrhenny Equestrian Centre."

"Monty isn't an easy horse to ride but the modern training methods used by previous international scholarship winners, including Carl Hanley, have made him an easier and better horse to ride."

In 1999 Ballaseyr scholarships were awarded to riders from Ireland, then in 2000 to students from Norway, Finland and Ireland. Selection is carried out at Ballaseyr Stables, following which successful candidates are trained to a suitably high standard to render them eligible for the European Young Riders Championship.

The first five months of the year-long programme are spent in the Isle of Man, then students are sent to work as riding pupils with trainers either in their country of origin or Germany or Holland for seven months, with all costs for training, stabling and competition fees met by Ballaseyr Stables.

In 2000 the scheme was extended to include young Manx talent in show jumping and dressage.

The Manx branches of the British Horse Society and the Isle of Man Pony Club submitted Hannah’s name as a possible scholarship candidate.

She was subsequently invited to Ballaseyr for an interview and assessment, and told to bring along her CV.

The Ballaseyr Manx training programme offered Hannah, as well as three other young Manx riders a place on the scheme. Sponsorship provided weekly tuition from international students with a view to the Manx trainees representing the Island in national and international competitions.

Regrettably the programme had to be cut short because of the foot and mouth outbreak in the UK, but not before the performance of all four students was assessed and judged, with Hannah emerging as the top student and awarded £4,000 towards the cost of competing outside the Isle of Man.

Runner-up was dressage rider Emma Quine who was awarded £1,000.

“The money from Ballaseyr is a real bonus, but it's the fantastic training you receive that really makes the difference,” says Hannah. “I've been so lucky - but I couldn't have come this far without the support of my family, especially my Mum and Dad.

“I'm also very grateful to the Isle of Man Sports Aid Foundation who recommended me for sponsorship in the form of travel vouchers from The Isle of Man Steam Packet Company, and of course to the trainers at Ballaseyr.”

“I hope to progress in my show jumping career to the point where I'm successful at national level and I would also like to teach younger riders.”

“At the moment my daily work is exercising, training and competing on clients’ horses. I get about -the Island from client to client on my scooter, which is economical, quick and avoids traffic jams!”

“I've a young inexperienced horse of my own. Carrie. When I got her everyone said she could be difficult to handle, but since I started working with her she’s never put a foot wrong. Carrie’s actually the first horse I’ve bought myself, from a girl who was emigrating. I paid for Carrie out of money I'd earned working with my clients' horses.”

The Isle of Man so far has escaped foot and mouth, but the crisis has certainly curtailed show jumping opportunities for Hannah. The outbreak has meant that Monty's Star will not be ready for the next round of the Blue Chip Championship.

“I'm restricted where I can ride, and fields are either too hard to ride on or waterlogged. It's a shame as this would have been the second year of riding Monty in this event. However, I'm going to go to England very soon.”

“We base ourselves in Blackburn at the at the Bargh family’s Osbaldeston Equestrian Centre, where my sister Carolyn also keeps her horse. Ballaseyr’s scholarship will enable me to stay in England and travel around the country on the show jumping circuit while aiming to qualify for the Scope Festival of Showjumping which is at the end of the summer.”

“There I will be competing against the very best national and international riders on priceless horses.”

“Whenever I can, I observe everything they do and try to tag along with them, walking the show jumping courses and listening to how they are going to approach a particular fence. It's very interesting and can be helpful to me, as clear rounds don't come easy!”

“Sometimes I think: ‘Why do I bother?’ but it soon passes.”

“Now, after so many years, I just can’t imagine life without my horses.” 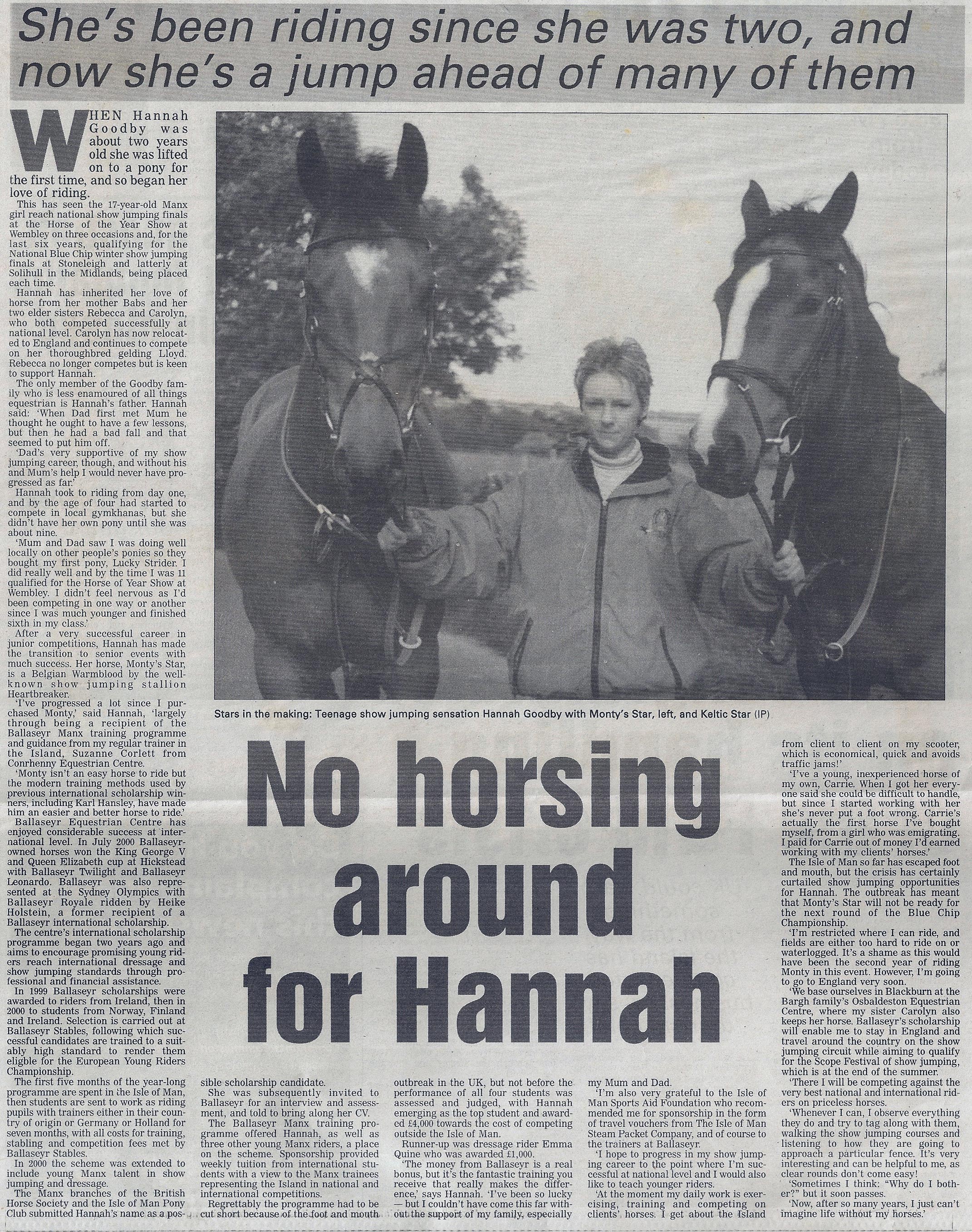