Grooming dressage and show jumping stars of the future

The Ballaseyr Stables Equestrian Centre is discreetly located on the outskirts Andreas, but its influence in top international dressage and show jumping arenas extends far beyond the Irish Sea.

Until very recently Sylvia Schorn was the centre’s training manager. She was at Ballaseyr for more than four years, and became closely involved in the training programme, before returning to her home country of Austria.

Before she left the Island Sylvia explained: “The international sponsorship programme began two years ago in the form of the Ballaseyr Scholarship Programme, with the aim of encouraging promising young riders to reach international dressage and showjumping standards through professional and financial assistance, in so doing providing these talented young riders with the opportunity to develop their skills and enter international competitions funded by the centre.”

“Candidates are recommended by their national equestrian federations, with 1999’s sponsorship programme offered to students from Britain and Ireland, and last year’s to representatives from Norway, Finland, Belgium and Ireland.”

“Selection is carried out at Ballaseyr, with candidates – who must be aged between 18 and 21 – judged on their show jumping and dressage skills. They are required to bring their own horse for the selection process - transportation costs for which are met by Ballaseyr Stables — and once we've made our selection, we would hope to train them to be of sufficiently high standard to compete in the European Young Riders' Championship.”

“In summary, the sponsorship programme provides a valuable career stepping stone for promising young riders who, without the scheme's financial support, would find the costs of competing internationally extremely prohibitive. Of the eight candidates presented to us last year, four were selected and benefited from a whole year's sponsorship.”

“The students spend five months in the Isle of Man from - November to the end of March - undergoing basic training, learning all the essential skills, riding a variety of young and old horses, and are also required to study in theory.”

“The next stage is for the student to work as a riding pupil with a trainer either in their country of origin, or Germany or Holland, for seven months, with all costs for training, stabling, competition fees met by Ballaseyr stables.”

“Then last year Ballaseyr Stables decided to extend the programme with a sponsorship scheme that would recognise and encourage young Manx riding talent, with a view to competing at national level.”

“Towards the end of last year we offered the Ballaseyr Manx Training Programme to all the Isle of Man official equestrian organisations, asking them for candidates between the ages of 16 and 21 from which we would choose four. All that we asked was that each candidate had their own horse, not a pony.”

“The selection made, the young riders received regular weekly tuition from our scholarship programme students, supervised by myself. This was mutually beneficial, as our students were gaining invaluable training experience, while the Manx riders were being provided with first class facilities to develop their skills, on the understanding that they would be working towards representing the Isle of Man, or their country of origin, in national and international competitions.”

“Each rider's performance was closely monitored and marked on a points system each week. At the end of the programme the student who had gained the most points would be awarded the sum of £4,000 and the runner-up £l,000 — in each case the money to be put towards the cost of competing at national and international level outside the Isle of Man.”

“Unfortunately the programme which began this January had to be stopped at the beginning of March because of the foot-and-mouth outbreak in the UK, so our students if effect ‘lost’ three weeks’ lessons, despite which, it was decided to go ahead with the awards regardless.”

Based on the students’ performance since January, the outright winner of the Manx training programme was Hannah and the runner-up was Emma. Due to the reduced number of lessons and the closeness of their points, Ballaseyr Stables also donated £250 prizes to Barbara and Katy.

Hannah has been riding since she was two years old, inspired, she said, by her mother who used to compete in local show jumping events. “I was very pleased to have been awarded the £4,000. It’ll make a tremendous difference when I get away later this summer to the UK, to compete on the show jumping circuit.”

“The money will make a big difference with the transportation costs for me and my horse, Montys Star, and for the livery charges, the diesel for the wagon and the entrance fees for the tournaments. If the foot-and-mouth crisis permits, I hope to get over to Blackburn from where I’ll work my way around the country on the circuit.”

Hannah, 17, who previously qualified for the Horse of the Year Show on her pony, now hopes to find some success at the event on her Belgium Warmblood Montys Star.

“I first read about the Scholarship Programme in Horse and Hound. I was lucky enough to be selected on the Ballaseyr Manx Training Programme and found the course really valuable. What was great about the programme was that you’re learning from young riders who use modern techniques and competing currently, so now my horse is going a lot better.”

When she’s not out riding Montys Star, Hannah exercises and competes other owners’ horses for a living, and, not surprisingly, is hoping to become a top class international showjumper.

Emma, who was awarded £1,000, blames her mum for her love of horse riding. “Mum loves horses and told me that when she was expecting me, in the early days, she used to go out riding, so that's probably how I came to love horse riding.”

Dressage rider Emma, 18, has ridden since she was three and was thrilled to be on the training programme. “The course was fantastic. It's the sort of thing you read about a lot in the UK, but there are not usually the same opportunities for riders over here.”

“It was a real shame that the foot-and-mouth outbreak meant we had to stop, but nevertheless the experience was really valuable. My trainer said my riding's improved a lot since the course, and my horse, an Irish thoroughbred called Diamond Splash, is performing a whole lot better now.

“Hopefully, later this summer, I’ll be going over to the UK to compete. Last year I was part of the Isle of Man dressage team when we went to Bedford to compete. That really gave me a taste for competitions, but I’d not pursued it much until this sponsorship scheme, as it costs so much to get across with your horse.”

“The training programme was a fabulous experience that is in rarely available to riders in the Isle of Man and has really made the me want to compete more in the future,' said the Ramsey the Grammar School student who hopes to go on to university to read geography… and to continue her dressage career.

Katy, 17, also gets her love of horses from her mother. She said that right from the start the training course had a profound effect on her riding. “From the very first lesson I had I knew that the course was going to help me improve. It made me more aware of my bad habits, and people told me they could see a difference in my riding almost immediately. Like others on the course, I was soon starting to ride better and I think it’s fair to say that the sponsorship students benefitted as well. As the weeks went on their instruction become more confident, as did our riding.”

Katy, whose horse is Irish-bred Carnsdale Top Gun, would like to make a career out of show jumping. She said the £250 would go towards transportation costs to compete this summer after her exams. She added: “Ballaseyr's been a great support to me for some time now, as they also helped me when I competed at the Royal International Horse Show and Wembley's Horse of the Year show, so I’m very grateful for their continued interest in my career.”

Barbara, 16, also remarked on the value of the training programme. “I was riding a young novice horse and the programme helped bring the horse, which was bred by my grandmother, on a great deal.”

“The tuition was excellent and has given me an excellent grounding. The money will come in useful this summer when I’m hoping to go across with my parents to compete either on the North West or South East circuit.”

Barbara, a health and social care student at Isle of Man College, has been riding since she was three-years-old and said she was inspired by her mother who now runs a riding school in Crosby.

The Ballaseyr Stables Equestrian Centre is part of the same group of companies responsible for the new Tower House retail and leisure centre Douglas, an organisation committed to the Isle of Man and its people and keen to encourage equine sport at the highest level.

Sylvia Schorn said: “There's clearly a wealth of young riding talent here in the Island, but, living on an island, many of our promising young riders are faced with the not inconsiderable travel and transportation costs if they wish to develop those talents.”

With this in mind Ballaseyr Stables formulated the Manx Training Programme with the aim of providing some of the most gifted young riders with both top quality instruction and financial support to encourage them to pursue their careers.

“I'm glad to have been in at the beginning of the scheme, and my successor, Anita Klein, will be progressing the Manx Training Programme over the next year.”

Students for the Manx Training Programme are selected by Ballaseyr Stables from candidates proposed by the British Horse Society representatives and affiliated equestrian organisations. Further details about the programme can be obtained for your local riding school. 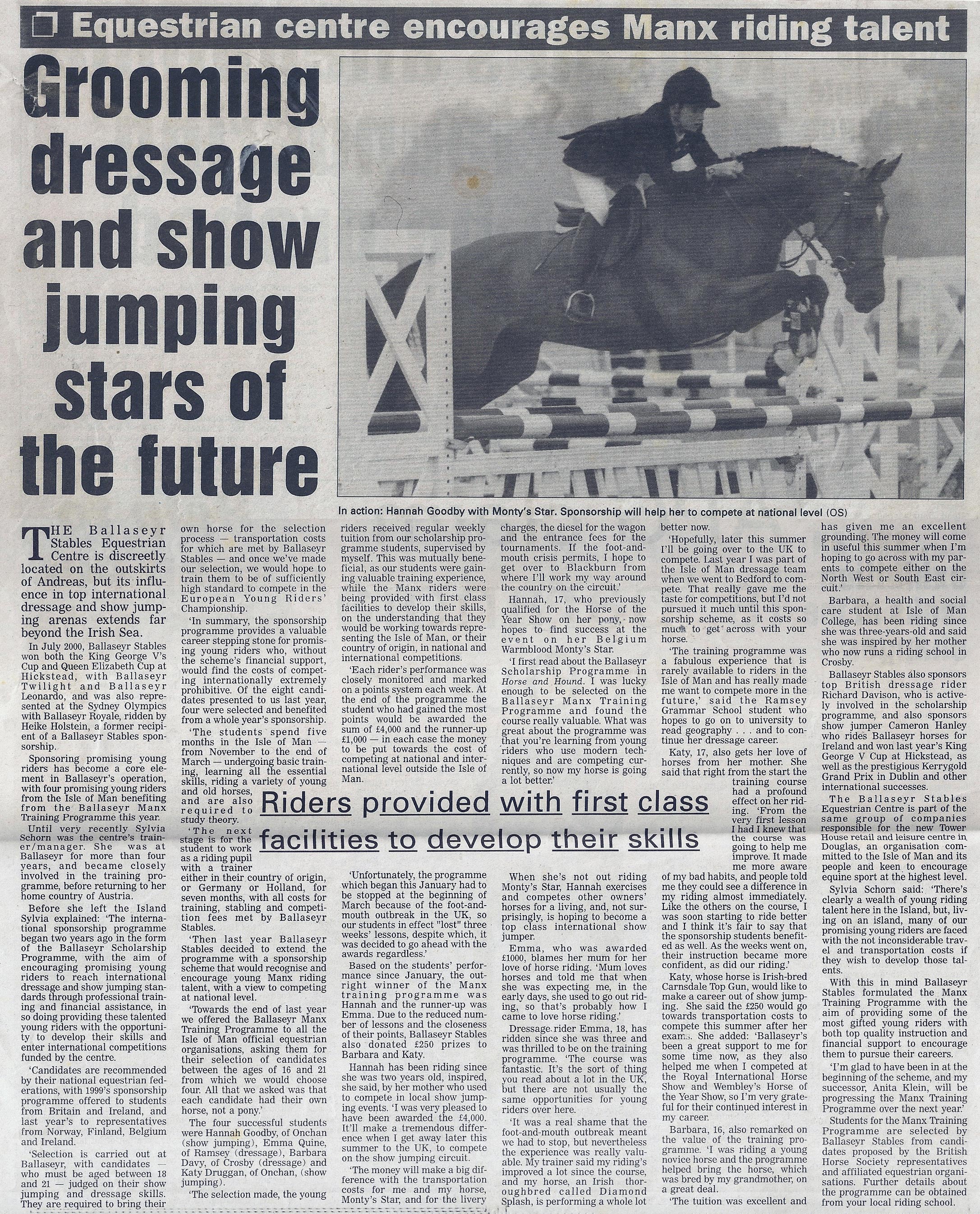